Silicon Valley Glory Fastpitch 18u is excited to announce try-outs for interested 2014 players. Age ranges 14-18 All positions will be considered, Pitchers are desired. Please see the Tryouts page for more details.

Several of our current 18u girls will be aging out or moving into their College Sophomore seasons so we are looking to fill our open roster positions. 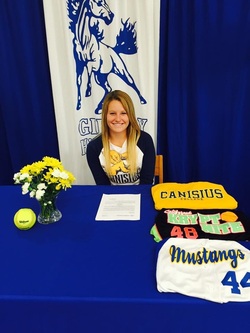 GILROY—Lauren Castro’s softball career almost ended before it ever really began. The Gilroy High senior quit her first year of tee-ball, intimidated by crowds and attention. But thankfully for Castro, her parents convinced her to give it one more try and this time, she fell in love.

Castro spent countless long nights pitching to her dad Ed Castro in the backyard—even when it was the last thing she wanted to do. All of that hard work has paid off in the form of an athletic scholarship to Canisius College. Lauren officially signed her letter of intent to play for the Division I Golden Griffins Friday in the Gilroy High library surrounded by her family and friends.

“I feel like I’m on top of the world,” Lauren said. “I’m just so happy and excited. I was waiting for this day for a really long time.”

Lauren has a long list of softball achievements, including leading the Mustangs to a Central Coast Section Division II championship in her sophomore year. On her signing day, attendees enjoyed cake which was decorated with pictures of her in various uniforms from all the teams she’s played on through the years. Lauren has played travel ball and trained year round to get here, but said it was worth it to achieve her dream of playing for a Division I team.
~ Erin Redmond (Gilroy Dispatch)

Team: (As Voted on by their teammates)

Mariah Martinez class of 2012 recently received the President's volunteer Service Award signed by Barack Obama. There are three levels: gold, silver, and bronze- She received GOLD! Mariah has just completed her sophomore year at Humboldt State. Cougar Nation is VERY PROUD OF YOU! 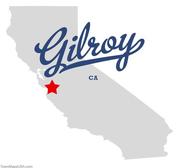 Gilroy CA. Softball Honorees Lauren Castro, ﻿Alexis ﻿Conlon and Brook Loesch’s names are seen repeatedly as stat leaders for their respective teams. On May 31, the trio made it onto another list—the Monterey Bay League-Gabilan Division First Team.

Christopher’﻿s Loesch ﻿led her team with four homers and 34 RBIs this season. Her performance helped the Cougars to a postseason berth, but they lost 6-5 at Milpitas on May 21.

Gilroy’s Castro boasts a .366 season average with 26 hits and 19 RBIs in addition to two homers. She was stellar in the circle, picking up eight wins for the Mustangs and 117 strikeouts through 135 innings pitched this season. Conlon was a rookie sensation for the Mustangs in her freshman campaign. She finished with a .290 average with 18 hits, 11 RBIs and two homers.

The trio are among 15 postseason honors received by Gilroy-area athletes. Christopher sophomores Michaela Decker and Pati Soria were named Second Team All-League alongside Gilroy’s Nicole Green, Ana Gamboa and Liezl Clark. Decker boasts a .469 season average, while Soria finished at .462. Green had 12 hits for the Mustangs this season, while Gamboa finished with a .373 average with 19 hits. Clark also had 19 hits and scored 13 runs in her freshman season.

Morgan England, Christopher, and Rachel Tomlinson of Gilroy were named to the MBL Sportsmanship Team. England and Tomlinson were also given honorable mentions as was Christopher’s junior pitcher Mackenzie Holt.

The full list of MBL honors can be found below:

Another Silicon Valley Glory alumni signs their letter of intent. 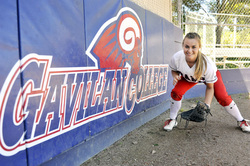